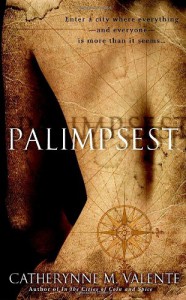 It's odd that, in trying to figure out how to explain this book, I first have to figure out exactly what is the sexually transmitted disease. It's not citizenship in the strange city of Palimpsest - that has to be earned. It's not passage to the city, as that has to be achieved, every time someone goes. It's the passport, I guess. The black markings of the city streets on the skin that never leave, that mark a person as someone who could go to Palimpsest, if they choose. Tattoo as sexually transmitted disease (okay, fine: infection. I know it's supposed to be infection these days. I just grew up with STD as the acronym and am having trouble switching to STI.)

And if that preceding paragraph isn't enough to tell you that this is a little bit unlike anything you've probably read before, I don't know what would. This is a strange and delightful little fantasy, about one of those cities that exist somehow alongside our own reality, accessible through mysterious means. Think Neverwhere, or Un Lun Dun. But passage to Palimpsest used to be easier, and being able to stay something achievable. A civil war was fought over immigration, and the repercussions are still being felt. (This is a slowly developing line through the book, unfolded as the main characters discover it.)

The mechanics are strange, but I think the important part is how much depends on someone else. You can't get there alone. You acquire your map to Palimpsest through sexual contact, and for each person, it turns up on a different part of your body, and on each map, a different intersection is highlighted. To get back, you have sex with someone else with a map, and each of you goes through to the spot on the other person's map. (I'm a little fuzzy about exactly when. Doesn't seem to be at the moment of orgasm. When you sleep afterwards? What if you don't sleep? One character had time enough after sex to take measures that meant she wouldn't remember her visit.)

But it's the interconnectedness. Your journeys are dependent on another person, and having that be sexual adds another layer of complexity to the story. And that's one of the things I like best about Palimpsest. Sex isn't a punchline. It's integral to the story, but it isn't there for laughs. And such a variety of sexual experience! Not just orientations, but multiple partners, sex as a sacrament, sex as a duty, sex as a rote exercise, sex for fun, sex for pain, sex to heal. So many ways people could use sex, taken seriously. How rare is that?

The story centres around four potential immigrants to Palimpsest, each marked after an initial sexual encounter. Amaya Sei, a young Japanese woman with blue hair, obsessed with trains, and carrying deep scars from her life with her mother. Oleg, a Russian expat living in Brooklyn, haunted by the drowned ghost of his sister. November, a solitary beekeeper from northern California, maker of lists. Ludo, Italian bookbinder whose wife has drawn away from him to her own group of four from Palimpsest. Their stories intertwine, slowly, leading to a quest to find each other. The citizens of Palimpsest remain divided on the treaty on immigration that ended the war. All four pay a price, and not all prices are acknowledged.

I love, as always, Valente's prose. It's beautiful, and in this case, weaves around you like the city itself. It's such a joy to read someone so skillful with painting pictures with words, sumptuous, incisive, and apt. I don't know if I want to immigrate to Palimpsest, let alone get my mark. But I enjoyed the visit.