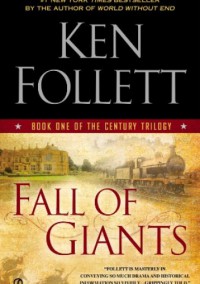 This is the second Ken Follett book I've read, and it thankfully avoids the major flaw of The Pillars of the Earth, the one that irritated me so consistently. There is no absolutely cartoonishly evil villain who adds nothing to the story except by being a horrible person and wanting to rape everyone.

I have little patience for such characters. Once you've established that they're horrible, where do you go? There can be no development, no changes, no different menace. And when your menace is all about rape? That's not that fun for the better part of a thousand pages.

This is a major step forward. There is no such thin master villain here. There are some other issues with the book, but none of that magnitude, and so I enjoyed it quite a lot more. It's an easy read, for one, for all that it is also the better part of a thousand pages.

It is the story of the Great War, told through a Russian family, a German family, an English family, and an American family. Well, family is a bit of a misnomer. This is the story of four or five young men, and makes occasional references to their parents, their sweethearts, their children. The English setting gets two more complete female characters, and the Russian and American settings about half of one each. (They're not in the book much.) So although this promises to be a family saga over multiple books, for this one at least, it is mostly focused on the young male experience, although there is quite a bit about female suffrage in England.

The story covers the lead-up to the war, the war itself, and the immediate aftermath. It's fairly interesting, and there were times when it seemed like Follett had done his research well. But then we came to the part I actually do know inside out and backwards (military history is not that topic), and he got it wrong, and so now I'm not sure.

It's a minor point, but it's mine, so:  in Toronto in 1920, there is no way in hell you could go around perfectly legally buying liquor. The Ontario Temperance Act was in force from 1916 to 1927, and buying alcohol was just as illegal here as 18th Amendment made it in the states.

Yes, I know there was massive smuggling of liquor over the border. This was due to the division of powers in Canada. Prohibiting the sale of alcohol was a provincial matter. Prohibiting the manufacture of alcohol was in federal jurisdiction, and except for a very brief period near the end of the war, the federal government declined to do so. So, we have the strange situation where it was perfectly legal to manufacture alcoholic beverages in Canada, but it was absolutely illegal to sell them. Hence why there was a supply to be sold illicitly in Canada and smuggled over the border.

The point is, walking around Toronto and going into a liquor store (post-prohibition invention, by the way) and buying cases of whiskey perfectly legally and openly? In 1920? Nope. Nope, nope, nope, nope.

Pedantic research nitpicking over. For the areas I don't know that well, nothing jumped out at me as glaringly wrong. But when we got to the stuff I do know, problems. On the other hand, this was recommended to me by a First World War historian, so maybe his military research is better than his prohibition research.

But here's my main issue with the book. As I said, it's very readable, it's fairly interesting, but if one of the representative young men was shown to have caused a major turning point in their country's history once more, I was going to throw something. Forrest Gump works by having him present at turning points, and even that doesn't work that well. This one has the young men actually being the power behind the scenes, present at and causing major events. It strains credulity, to say the least.

Let's take the Russian main character, for instance. His father is hung by Russian nobles for poaching. He is with his mother at the gates of the Winter Palace on Bloody Sunday. His mother is killed. He is in the first Russian military unit to see service in the Great War. He is the first soldier to lead a revolt in the Russian revolution. He dictates the first pronouncement of the new government. He meets Lenin at the station when he re-enters Russia. He warns Lenin to get out of town when things become difficult. He's the one who brings Lenin back to the Parliament to cement the Bolshevik victory.

Really? I mean, really? It's kind of okay to want all those things in there. It's even okay to want your own characters somehow involved. But for one individual character, utterly unnoticed by history, apparently to be instrumental in so many things? It isn't poignant, it's just irritating. Similar massive improbabilities cluster around each of the other nationally representative young men. At times, I wanted to investigate this supernatural phenomenon.

It's far too much. The stories themselves are interesting, but shoehorning your five young men into EVERY. SINGLE. EVENT. of the First World War is not only massively unlikely, it's ludicrous.

If you can overlook that, then this is a fun read. I mostly enjoyed it, although it got to the eyerolling stage pretty quickly every time a historical issue came up and somehow one of our five young men was right in the middle of it. Again.